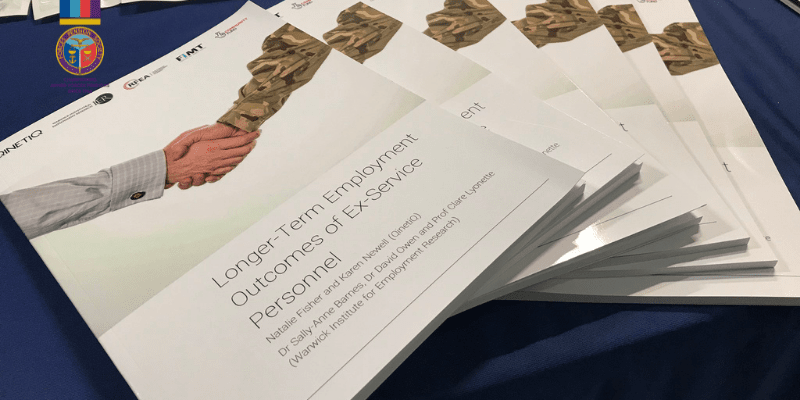 The Longer-term Employment Outcomes of Ex-Service Personnel report from QinetiQ, in partnership with Warwick Institute for Employment Research and RFEA – The Forces Employment Charity, and commissioned by Forces in Mind Trust, is one of the first UK studies to explore the longer-term employment outcomes for veterans, beyond the first two years of resettlement.

The research found that while the majority of ex-Service personnel maintain employment over time, it can often involve numerous jobs and periods of un-employment. Not all ex-Service personnel reported being satisfied with their civilian job or career; less than half (44.5%) felt that they found the ‘right job’ for them in the longer-term and which maximises their potential (42.5%) or provides them with opportunities to progress (42.4%).

The research recommends several initiatives to better prepare Service leavers for the civilian labour market and to ensure that employers can take advantage of this skilled cohort. They include:

Improved data collection on the employment outcomes of ex-Service personnel and their families to ensure government and support services can effectively identify challenges and respond effectively.
Some groups face greater challenges when leaving the Armed Forces, making them more likely to experience unsuccessful employment in the longer-term. This includes women, ethnic minorities, those who are wounded, injured and sick, and older Service leavers. In addition to demographic factors, unrealistic expectations of the civilian job market, a lack of transferrable skills and an inability to adapt to civilian environments were all found to persist over the longer-term and reduce the chances of a successful transition out of the Armed Forces.

“This important report highlights the ongoing challenges experienced by ex-Service personnel as they move from the Armed Forces into civilian employment. Successful employment is not just about finding a job; we must look beyond the traditional two-year point, and beyond an approach that saw being employed as success, full stop. It is far more nuanced and must encapsulate the experiences of this heterogeneous group. The report helpfully sets out a measure for successful employment which I would encourage government and others to use going forward.

“We will continue to work with the Armed Forces and business communities to communicate the value Service leavers have, and to empower them to take control of their transition through the provision of tailored support.”

“This study has highlighted that transition to civilian life is not time-related and differs according to the individual and complexity of their situation; taking some personnel far longer to adjust. Whilst many ex-Service personnel maintain employment longer-term it is clear that not all find the ‘right job’ for them or feel successful. The findings of this report suggest that moving beyond a simplistic measure of employment success is key to understanding the challenges faced by ex-Service personnel longer-term and that it is too simplistic to divide ex-Service personnel into two groups: those who are successful and those who are not successful. Of course these extremes exist, but for many the truth lies somewhere in the middle.”

“This report breaks new ground by exploring what long term employment looks like for Service leavers, beyond their first two years post-discharge. These findings show that whilst many ex-Forces find employment with relative ease in those early years of transition, some may face other barriers later on in their civilian careers.

“The research reveals that whilst veterans regard the Military as having provided them with highly sought-after ‘soft skills’, such as leadership and teamwork, there appears to be a gap in transferable skills to ready them for the business world, including commercial and marketing skills and financial awareness. It is important that we learn from these important new findings and act on this new data to ensure veterans receive the support they need to reach their full potential and feel successful in their civilian careers.”