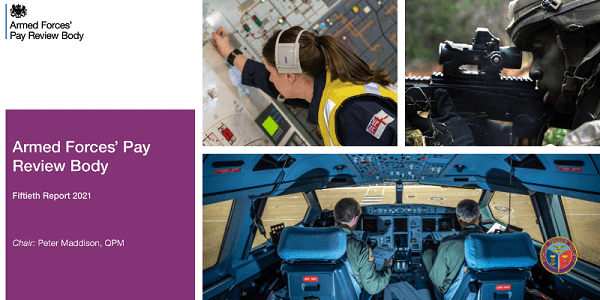 The AFPRB is independent and makes recommendations on the remuneration and charges of the UK Armed Forces.

This report sets out the AFPRB’s analysis of evidence given by relevant organisations and makes recommendations for Armed Forces’ remuneration and charges.

It has been announced that there will be a £250 uplift for all members of the Armed Forces earning less than £24,000* which will be implemented from next month's pay packet and will be back backdated to 1 April 2021

In a statement, Ben Wallace, Secretary of State for Defence said

The Government recognises that public sector workers play a vital role in the running of our public services, including in their remarkable commitment to keeping the public safe in the continuing fight against Covid-19.

The Government received the Armed Forces’ Pay Review Body (AFPRB) report on 2021 pay for Service Personnel up to and including 1-star rank on 21 July 2021. This has been laid before the House today and published on GOV.UK.

The Government values the independent expertise and insight of AFPRB and takes on board the useful advice and principles set out in response to the Government’s recommendations outlined in the report.

As set out at the Spending Review (2020), there will be a pause to headline pay rises for the majority of public sector workforces in 2021-22. This is in order to ensure fairness between public and private sector wage growth, as the private sector was significantly impacted by the Covid-19 pandemic in the form of reduced hours, supressed earnings growth and increased redundancies, whilst the public sector was largely shielded from these effects. This approach will protect public sector jobs and investment in public services, prioritising the lowest paid, with those earning less than £24,000 (Full Time Equivalent) receiving a minimum £250 increase. The pause ensures we can get the public finances back onto a sustainable path after unprecedented government spending on the response to Covid-19.

The AFPRB have recommended the following:

a £250 uplift for all members of the Armed Forces earning less than £24,000, where X-Factor is excluded from this salary calculation;

an increase in accommodation charges of 1.7% in line with the increase in the actual rents for housing component of CPI, not to be backdated; and

other targeted eligibility changes to some categories of recruitment and retention payment.

The Government accepts the AFRPB’s recommendations on accommodation charges and recruitment and retention payments in full.

However, the Government does not accept the AFPRB’s recommendation to exclude X-Factor from the low earner salary calculation as X-Factor is a component of the overall military salary. Instead the Government will implement a £250 pay uplift for all regular and reserve Service Personnel earning less than the equivalent of £24,000 per year inclusive of X-Factor. This rise will be implemented in November 2021 salaries, and be backdated to 1 April 2021. Service Personnel have also continued to have access to annual incremental progression where appropriate.

The Government recognises that there is a further discussion to be had over the use of the X-Factor for pay and salary comparability work. The Armed Forces Reward and Incentivisation Review, recently announced in the Integrated Review’s Defence in a competitive age command paper, along with the AFPRB’s planned review of X-Factor in the 2023 Pay Round will provide the opportunities to explore this topic in much greater depth.

The year 2021-22 has seen no waning in the important outputs our Armed Forces. From continuing to support the national response to Coronavirus, to the exceptional work of all those involved in the Afghanistan evacuations, all whilst maintaining our critical national Defence outputs. It is for this reason I am pleased that, despite the unprecedented impact the pandemic has had on the nation’s finances, the Government has been able to act in the spirit of the AFPRB’s recommendations and demonstrate it’s commitment to looking after those who look after us.

Source: GOV.UK -  All content is available under the Open Government Licence v3.0, except where otherwise stated - images MOD © Crown copyright