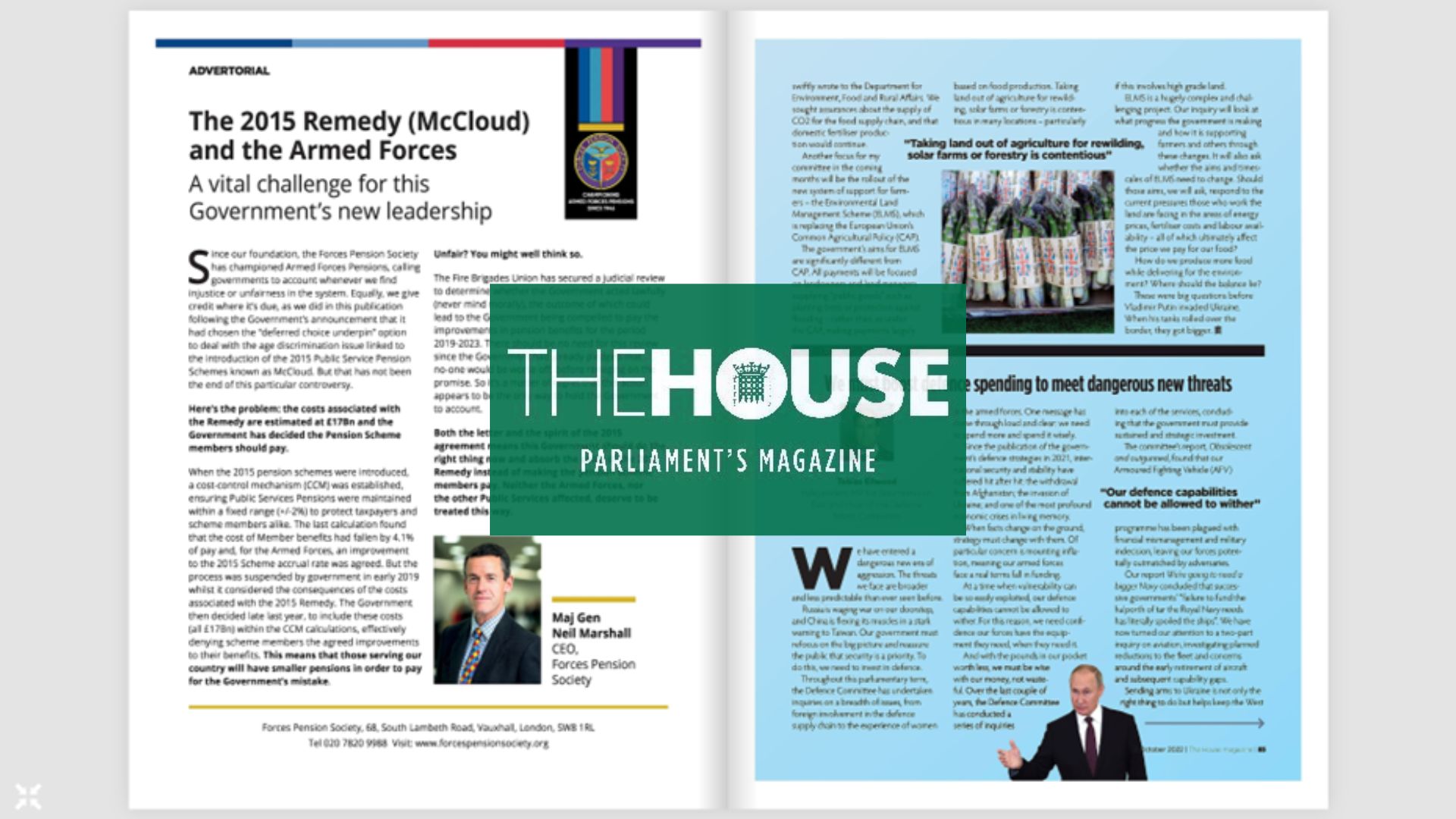 Since our foundation, the Forces Pension Society has championed Armed Forces Pensions, calling Governments to account whenever we find injustice or unfairness in the system.

Equally, we give credit where it’s due, as we did in The House magazine following the Government’s announcement that it had chosen the “deferred choice underpin” option to deal with the age discrimination issue linked to the introduction of the 2015 Public Service Pension Schemes known as McCloud. But that has not been the end of this particular controversy.

Here’s the problem: the costs associated with the Remedy are estimated at £17Bn and the Government has decided the Pension Scheme members should pay.

When the 2015 pension schemes were introduced, a cost-control mechanism (CCM) was established, ensuring Public Services Pensions were maintained within a fixed range (+/-2%) to protect taxpayers and scheme members alike. The last calculation found that the cost of Member benefits had fallen by 4.1% of pay and, for the Armed Forces, an improvement to the 2015 Scheme accrual rate was agreed. But the process was suspended by government in early 2019 whilst it considered the consequences of the costs associated with the 2015 Remedy. The Government then decided late last year, to include these costs (all £17Bn) within the CCM calculations, effectively denying scheme members the agreed improvements to their benefits. This means that those serving our country will have smaller pensions in order to pay for the Government’s mistake.

The Fire Brigades Union has secured a judicial review to determine whether the Government acted lawfully (never mind morally), the outcome of which could lead to the Government being compelled to pay the improvements in pension benefits for the period 2019-2023.

There should be no need for this review since the Government had already pledged that no-one would be worse off, before reneging on the promise. So it’s a matter of regret that this action appears to be the only way to hold the Government to account.

Both the letter and the spirit of the 2015 agreement means this Government should do the right thing now and absorb the costs of the 2015 Remedy instead of making the pension scheme members pay. Neither the Armed Forces, nor the other Public Services affected, deserve to be treated this way.